My 1-year journey to becoming a Microsoft MVP 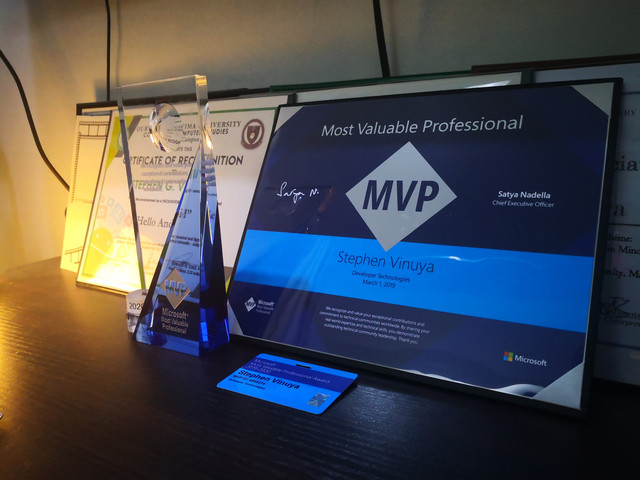 to becoming a Microsoft MVP and how reaching this award has greatly helped me towards the growth of my career.

But wait... What is a Microsoft MVP to begin with?

Microsoft Most Valuable Professionals, or MVPs, are technology experts who passionately share their knowledge with the community. They are always on the "bleeding edge" and have an unstoppable urge to get their hands on new, exciting technologies. They have very deep knowledge of Microsoft products and services, while also being able to bring together diverse platforms, products and solutions, to solve real world problems. MVPs make up a global community of over 4,000 technical experts and community leaders across 90 countries/regions and are driven by their passion, community spirit, and quest for knowledge.

But for me, I see it as the Nobel Prize Award for the Information Technology Industry. Since the MVP award is only awarded to someone

who greatly helped, contributed and encourage other people in the IT industry. And not to mention that we are only 2863 as of the moment I'm writing this article across the world.

And we have only 8 MVPs in my country, the Philippines.

I know what you are thinking, yeah that's cool!

What do you need to do to become one? Being awarded as a Microsoft MVP is usually a 1-year process, wherein the Microsoft MVP Award's Team

will review your year's worth of contributions in the community, and of course, the more contributions you did the higher the chance of becoming one.

Those contributions can be a talk, seminar about your expertise, open-source projects, blogs, and even tutorial videos. So you want to start contributing now,

but wait.. there are certain topics of contribution which are credited by Microsoft, and yes since its a Microsoft award all topics must be related to Microsoft's technologies.

Below are the technologies that your contribution should be related to:

Now you might be thinking why should you become one? Like why do I have to do a year's worth of contribution just to become one?

And also it is not certain that you'll automatically become one, cause the contributions you did will undergo a reviewal process.

It will not also give you money, or will it not?

Let me share with you this, that my salary back when I was still a Junior Web Developer(just 2.5 years ago) is exactly 5 times what I'm earning right now.

And it's also not because I'm awarded as a Microsoft MVP, its because I dreamed and aspired to be a one. It's the JOURNEY of becoming an MVP that

made a huge upgrade to my skill set and my salary also, not just the MVP status itself.

It all started when I was about to finish my degree and received my diploma, I decided to attend a coding boot camp.

Wherein speakers will teach the attendees a certain topic and do live coding in front, for us attendees to follow.

The experience was fantastic, and I was very amazed at the speaker that time, for the courage and expertise he has, to be able to code in front smoothly

without having to open Google if ever he encountered an error.

The very first coding boot camp I have attended, Trinmar Boado was the speaker of this event about Feather.js + Angular.js

Then after receiving my diploma, I got a job at FFUF Inc. Manila, as Junior Web Developer, I was assigned to a team to work with various projects.

The usual Junior Web Developer, I consulted my team lead, asks for things I don't know, and assistance to my tasks. Back then we used to have a lot of free time

in the company, what I always do is to watch Youtube tutorials related to development that piques my interest, then I discovered p5.js, by a Youtube channel

that Daniel Shiffman started, he was fun to watch, he codes fast and he explains every single detail perfectly. So, every single day that I have free time at work

I would watch his videos and learn new things.

So I applied what I learned.

Then I after watching all of his videos and learned it, I got this sudden feeling that I need to share this with other people

for them to know this wonderful knowledge that I have learned.

Then after days have passed I got a message from my university where I graduated, to do a seminar for the students with the topic of my preference,

I immediately replied: "Yes, I would love to", but the excitement I had suddenly turned into fear, asking the questions to myself, can I really talk upfront? what if I buckled up or

forgot the codes that I will teach.

Then the day of the event happened.

I was very nervous at first, but when I saw that the students learned something and started to ask me things about what they learned, showing that they are interested,

that was PRICELESS for me. Then it motivated me to do more coding boot camps, so I messaged some of the organizations in my country that

conducts coding seminars and boot camps such as DevCon, Ground Gurus to let myself be invited as a resource speaker.

Then the rest is history.

Then little do I know that my skill set is growing inch by inch as I do coding boot camps, my career is also growing at FFUF Manila Inc., that I was promoted

to Mid Level Web Developer and later on to a Team Leader, all in one year. All the new things I have to learn so that I can share my experience has greatly helped me

in reaching the Mid Level Web Developer promotion, then my ability to speak upfront and also to speak in a way that others would understand what I'm saying helped me

a lot to be promoted as a Team Leader.

Then I met an MVP who is also one of the speakers of an event where I was invited as a speaker also, it piques my interest so I ask him how can I become one?

He gave me a lot of advice to help me reached the award. I followed them one by one, I started to do blogs, answer questions to StackOverflow, do talks over and over and over again.

Then the rest is history, 3 months after Devlin Duldulao also a Microsoft MVP the person who also helped me and guide me to become one, nominated me as an MVP,

I was blessed with the great news from being 7 Microsoft MVPs in the Philippines it's now 8, where my name is now included in the list.

I'm very grateful to those people who inspired me in reaching this dream.

Achieving something isn't always about reaching it, it's always the JOURNEY that you have been, sacrifices, passion and also the time you have to spend in order to achieve that counts.

Thank you for reading!